Author‘s Note: This is is a live post, meaning I will be adding on to it as things change. Please excuse any typos. I’m writing this quickly to provide the fastest info possible.

The Magic: The Gathering singles market is a volatile beast. As such I’ll be updating this post live for the next two days as we go into the January 6th Pioneer Banned and Restricted Announcement. You can stop back here for the updates, or just turn notifications on for the #MTGFinance channel on our Discord server. Ready? Let’s set the stage.

We know to expect a Pioneer announcement on Monday the 6th, but we don’t know if there will be any bannings. We also don’t know if there will be any changes in other formats. Nothing is off the table since they can now ban a card on any Monday that they chose. With what we’ve been seeing in Modern, I would not be surprised to see some changes there.

I just got back from SCG Columbus where seven of the the top 12 decks had Oko, and the winning team rocked 11 of the possible 12 in their line up. A number of people were looking to sell off or trade their Oko’s. This is due to the fear of it becoming banned. It’s dominance is undeniable and the lack of diversity in the format is becoming apparent. Here’s the stats on Oko, Thief of Crowns tonight.

Because of the new Heliod, there’s a lot of speculation about the possibility of something from this combo being banned. I don’t think it will be preemptively banned, but I’ll note the stats here anyways, since there was a small spike due to the combo.

The “Splinter Twin” combo of Siona, Captain of the Pyleas and Shielded by Faith has forced some movement of the FOIL copies from Gideon’s Signature Spellbook (the only foil available). They went from $2.97 shipped to $7.08 on TCG Player. I’ll be keeping an eye on this, it now seems to be in low supply so if the demand is real (and not just speculators) then it could push higher.

Before I close this entry, I want to point out two other movers which are nods to the Theros Enchantment theme.

Eldrazi Conscription, both versions, have moved up slightly. The current market price is between $5.48 and $6.57 depending on the version.

Helm of the Gods has seen a slight bump in the non-foil copies, but the asking price on foils has jumped up to $5.99+. It’s still showing a market price of $3.10 so this movement is recent.

That’s all for now. I will jump back in when tomorrow with some Banned and Restricted announcement news. 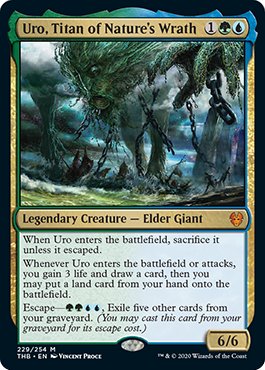 No news on banning but preview are hitting. A Simic Legend was just  previewed which bolsters existing “good“ cards like:

I’m particularly interested in it’s interaction with Pelt Collector ($2.98) and Yorvo (.60). It pumps both of them twice because of it‘s sacrifice clause. Both of these cards have seen play in Mono green decks in Pioneer.

Keep an eye on Cavalier of Thorns there have been social media post from both Bryan Gottlieb and Andrea Mengucci referencing the card. 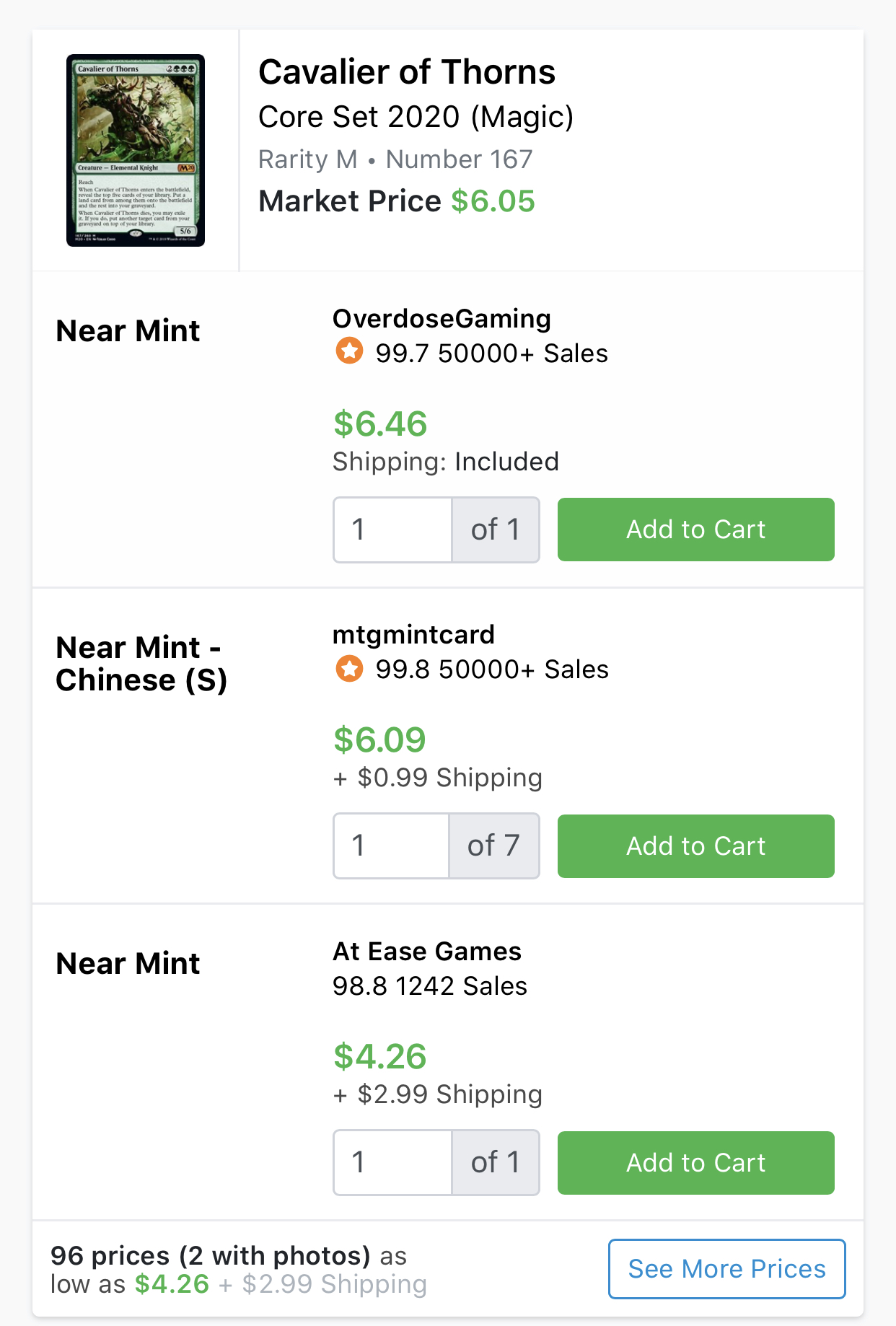 It curves nicely from Uro, into Uro, even putting some cards in the graveyard as escape food.

No Bans! I’ll come back and wrap up with some thought on what this means.

Even though nothing was banned on Monday the 6th, that doesn’t mean there’s nothing to talk about. First of all, there was no official word about Modern. And as speculation flew around, people made their feelings known about what they wanted to see banned in Modern. The general mood is a desire for multiple bans. One thing is for sure, when that day comes, I don’t want to own any Oko’s. Interestingly enough, there was some movement in Oko’s price today.

The market asking price softened up, but the Card Kingdom buylist was raised. StarCity on the other hand, is not so confidant, they dropped their buylist offer. My advice would be to sell your Oko’s as soon as you can – unless you need them to play Modern in the recent future.

The other cards in the Modern ban conversation are:

You should be careful about picking these cards up. But if you have to, try to mitigate risk by trading cards with a similar make-up. For example, breaking a Mox Opal (and something else) into set of Oko’s, helps keep the balance right. The opposite of this is taking stable cards like Shock Lands and trading them for a risky card like “Mox Opal”, you don’t want to do that.

Let’s close up with a look at Pioneer. It appears that Wizards of the Coast is happy with the format and this is the official starting place. That means that key strategy cards which had a ban hovering over their head may now start to rise in price. Here are some examples with their data:

I’ll be watching these over the next month and keep information flowing in the MTGFinance channel of our discord server. I hope this post was informative and helpful to you. Thank you for reading.