May Banned and Restricted Live-Journal (Complete)

Author‘s Note: This is is a live post, meaning I will be adding on to it as things change. Please excuse any typos. I’m writing this quickly to provide the fastest info possible. All prices use TCGPlayer Market Price.

Good Morning Everyone! Today we’ll see a banned and restricted announcement for Legacy, Vintage, and Brawl.

Let’s take a look at the boogie cat.

Lurrus has had a profound impact on Legacy and Vintage. It’s requirement of “Each permanent card in your starting deck has converted mana cost 2 or less.” is not a restriction for these formats. Most decks naturally meet this requirement. In the past, some cards have been restricted in Vintage, but due to the nature of the Companion mechanic, a restriction would have no impact. Most decks only run one copy of Lurrus in the sideboard.

I expect to see a ban of Lurrus in both Vintage and Legacy. I also wouldn’t be surprised to see a hedge move from Wizards of the Coast (WoTC).  They could take a page from the old Commander banned list and ban Lurrus as a Companion. WoTC is treading lightly with the companion problem by starting with the older lesser-played formats. They don’t want to ban cards so soon after release, but I read this as a signpost of things to come. 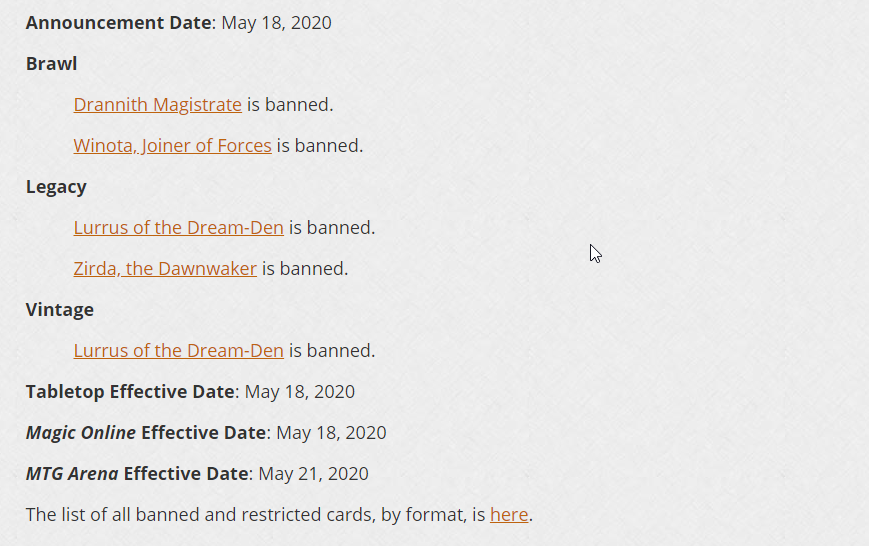 As you can see from my first entry, I didn’t have much to say about Brawl. This is because I don’t know much about Brawl, but also because Brawl is not financially relevant. It’s not played in paper; it is mostly an MTG Arena format. If we’re honest Vintage and Legacy don’t drive prices much either. As such, these bannings will have little impact on the pricing of the banned cards. We’ll probably see a drop in the FOIL Extended art Lurrus, but other than that, I expect things to stay on their natural trajectory. Which is a post-release downward trend.

A Signal of Things to Come 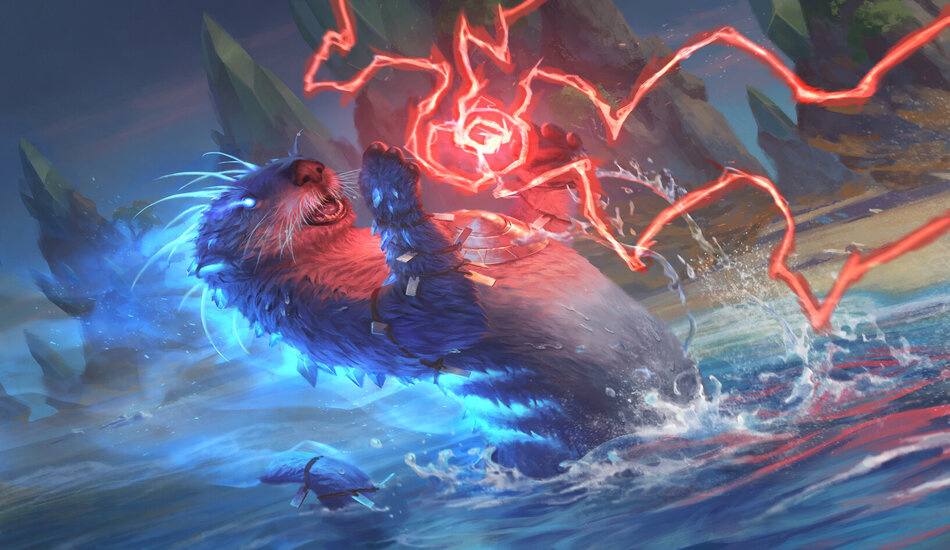 The most important part of this announcement is not what they banned, but instead what they said:

“If we see signs of long-term health issues resulting from high metagame share of companion decks, we’re willing to take steps up to or including changing how the companion mechanic works.”

There’s no question that we have a “frequency” or meta-share problem with Companions. In my opinion, this problem will persist and WoTC will need to address the Companion issue. This spawns some deeper thinking questions. Those questions is where we will find the financially relevant information. For now, here are the question that I will be thinking about:

How will Wizards address the companion issue? – Will it be with a simple fix like putting a card from your hand on the bottom of the library?

How will a future “fix” impact Commander? – Does this mean that Lutri, the Spellchaser will be unbanned?

Which Companions benefit or are hurt from such a “fix”?

I’m going to take some time to think about and research these questions. I’ll also continue to report on the financial shifts (if any) due to the banning announcement. Stay tuned for more.

Wizards of the Coast dropped a bomb today with their Banned and Restricted announcement. Here are the details.

My initial reaction was that this should impact Commander since the Companion is being put from the sideboard into your hand. However, Sheldon has confirmed that there are no changes to their legality at this time.

Meanwhile we can expect Agent of Treachery to drop like a rock after it had ascended to nearly $9! Although, after the crash, I expect Agent to see a slow appreciation over time due to Commander interest. 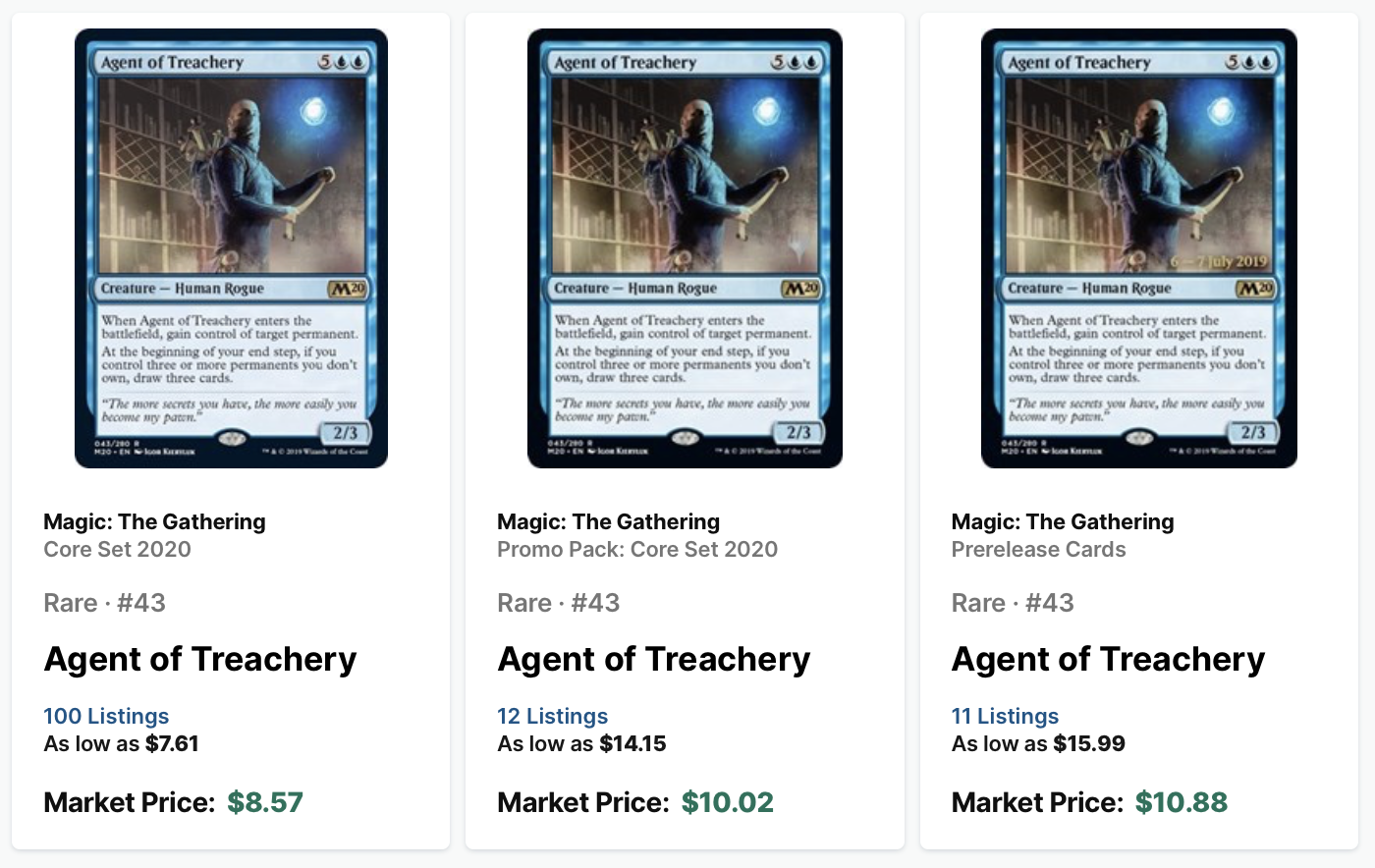 Fire of Invention never really “popped” in terms of price, so I expect a small dip but there’s not much room to fall!

I’m not sure where these changed put things in different formats, but I’ll end this post with some thoughts from the pros!

It will be interesting to watch things unfold. As always thank you for following along. Have a great week!